My first full day in France was a whirlwind of an adventure, but one I will never forget!

For those who were wondering after the end of my last post, my checked bag was 22.5 kgs, so about a pound under the weight limit! To say I was grateful was an understatement. Thankfully, my carry-ons were under the weight limit too (I think it is 13kgs between both bags). I was not about to pay for another checked bag. After a tearful goodbye to my parents, I headed through security. Unbelievably, it took maybe 20 minutes to get through security—less time than it has taken me on some national flights. As there was also no line to check my bag, I had an extra two hours to kill before boarding in which I walked around and wrote the previous blog post. 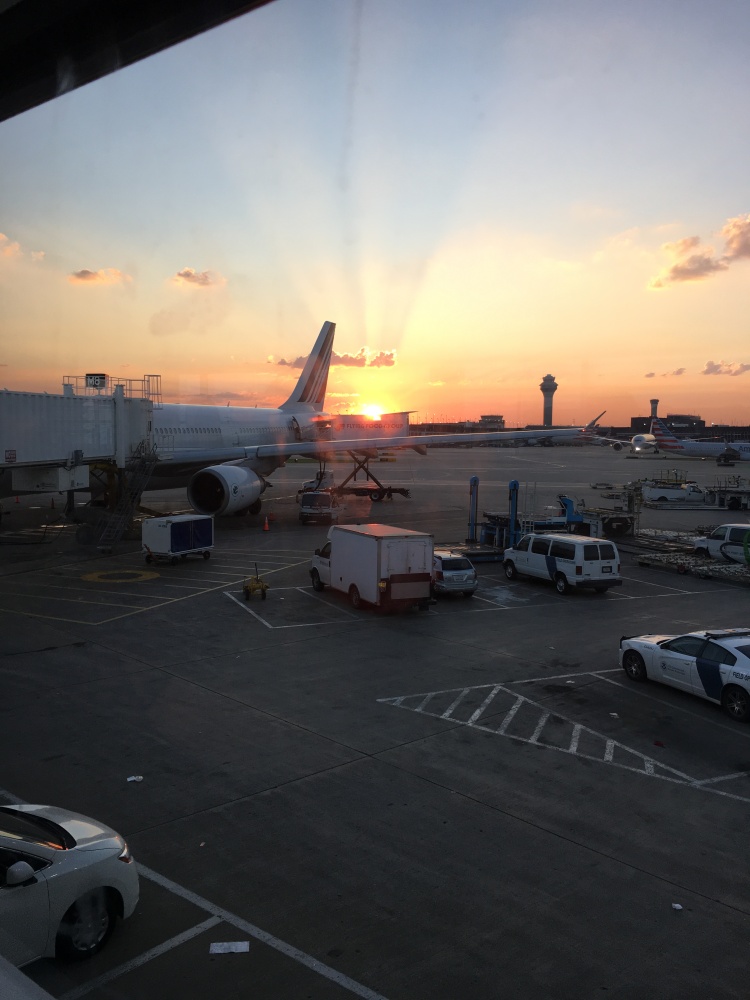 After my 8-hour flight direct from Chicago O’Hare to Charles de Gaulle, I got off the plane only having slept for 2 ½-3 hours (shout-out to that petit bouteille de Merlot for inducing my power nap). While I had aspirations of sleeping for at least 5 hours, being awake definitely had its perks. Because of the obvious lack of light pollution over the Atlantic Ocean, I had the most amazing view of the night sky. Albeit through a foggy airplane window, I had never seen a more beautiful or perfect image of the masterpiece that is the universe. Plus, I saw a handful of shooting stars, which was an unexpected perk! I was sleepy but filled with insurmountable joy.

Getting off the plane, I felt good despite the lack of sleep, but my biological clock felt very off after being awake for almost 24 hours. It took about an hour to get through customs and I’m glad I got there when I did because the line behind me was atrocious. I grabbed my checked bag, made my way through the terminal, bought my train ticket into the city, and had an easy ride from the airport to my stop at the Jardin du Luxembourg.

After getting off the train, I took a breather on a bench in the jardin (it’s not easy to carry 36kgs of luggage through the airport and on the metro!). I used Google Maps to get to my hostel, which was about 1km away from the station. Let me just say, praise Jesus for GPS. I had previously set my location as Paris, so I was able to keep my phone in airplane mode but still navigate to my hostel. I made it to the hostel around 14h00 and although I couldn’t check-in until 16h00, I was able to store my bags for free. Then, I was off the explore the city!!

There has never been a time more than now that I wish I had a photographic memory. Everywhere I looked, I wanted to commit to memory because it was just that stunning. My first stop of the afternoon was the Panthéon. It was fairly close to my hostel, probably less than .5km, so I used it as a reference point whenever I was turned around and lost. 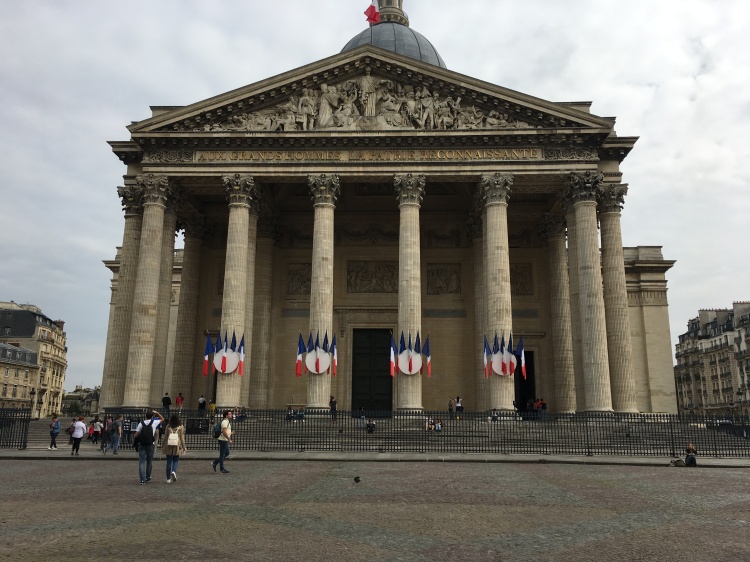 Then, I returned to the Jardin du Luxembourg to pay it a proper visit. 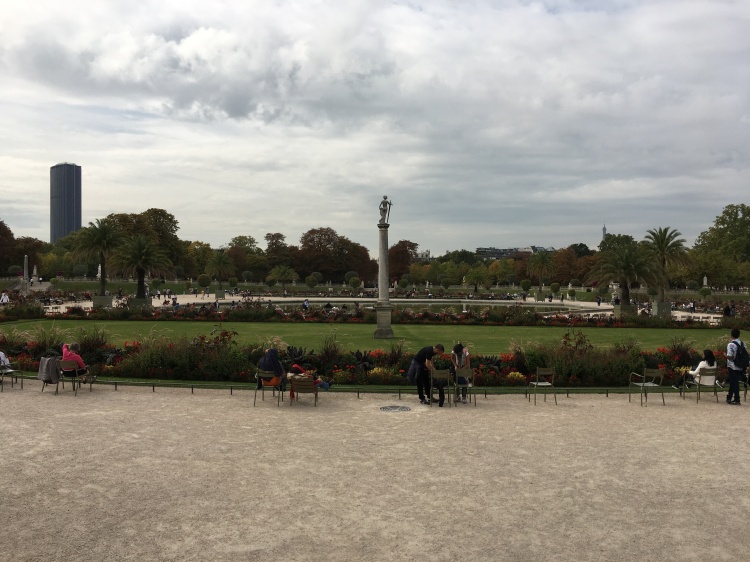 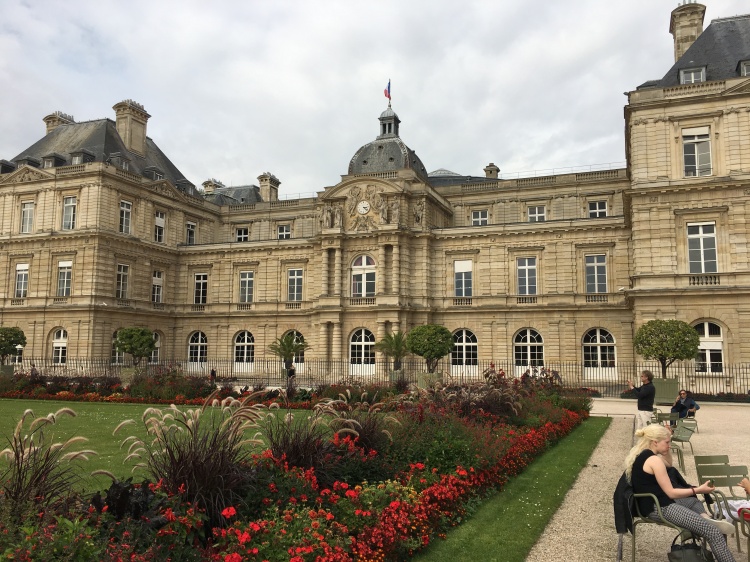 I knew I would need money for the upcoming week, so I found an ATM to withdraw from. After an embarrassing number of attempts, I finally got my debit card to work and got some euros. Having never handled euros before, I would have to say I think they make so much more sense than American money! I already know I am going to miss them at the end of my contract.

I didn’t have a destination in mind, so I wandered in the direction of the Eiffel Tower. I ended up walking all the way out to Pont Neuf before turning around! 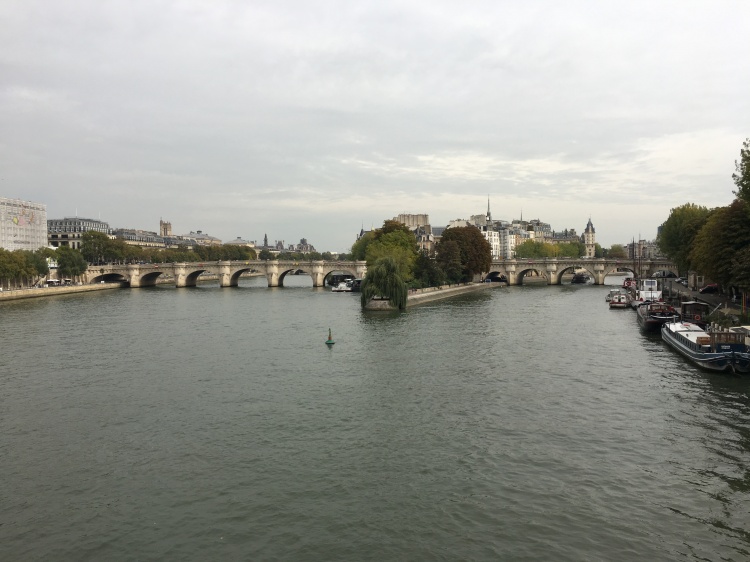 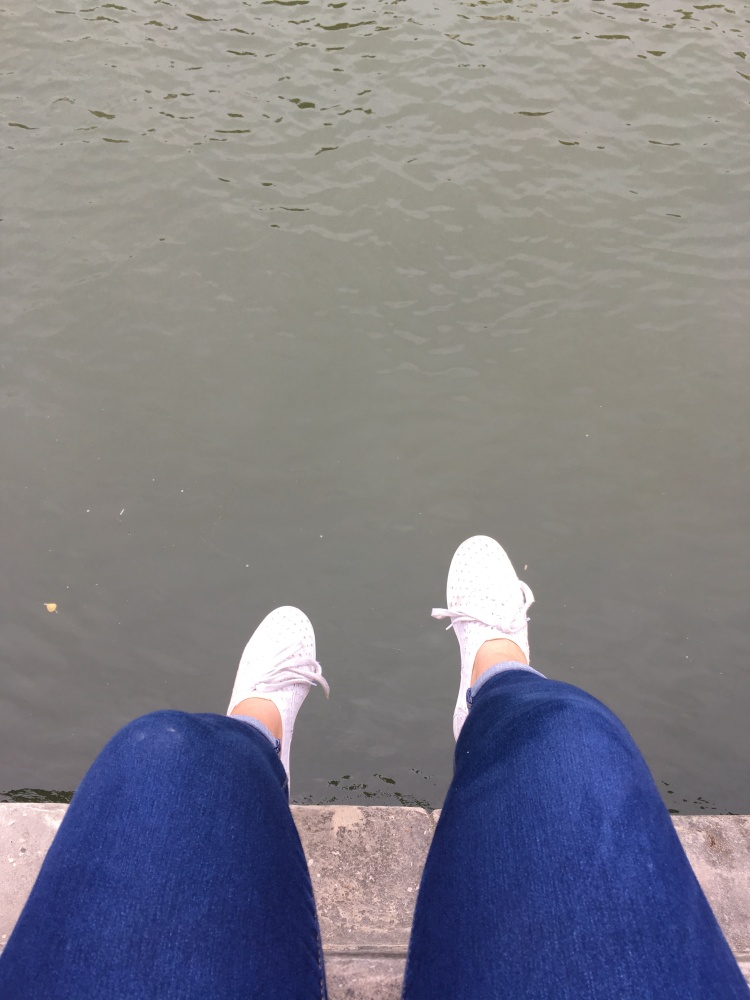 While I was hoping to make it all the way to the Eiffel Tower, it was nearly 16h00 by the time I made it to Pont Neuf and I didn’t want to be too late to check-in. I trekked back to the hostel, checked-in, and got my bed situated before relaxing in the lobby for a bit.

Before this point, I felt I was going strong on my 3 hours of sleep but boy, was I wrong. I sat down in the lobby and had zero desire to get up and do anything. I had planned on hopping on the metro and seeing the Eiffel Tower, but that idea got nixed. Instead, I went out in search of something easy for dinner.

There was a restaurant stand just down the street from the hostel called “Au P’tit Grec” that (a) smelled amazing and (b) had a line every time I passed it that afternoon, so I decided to give it a go. Needless to say, it did not disappoint. I ordered a Galette du Chef—ham, cheese, salad, onions, and tomatoes—and it was as good as it looks. 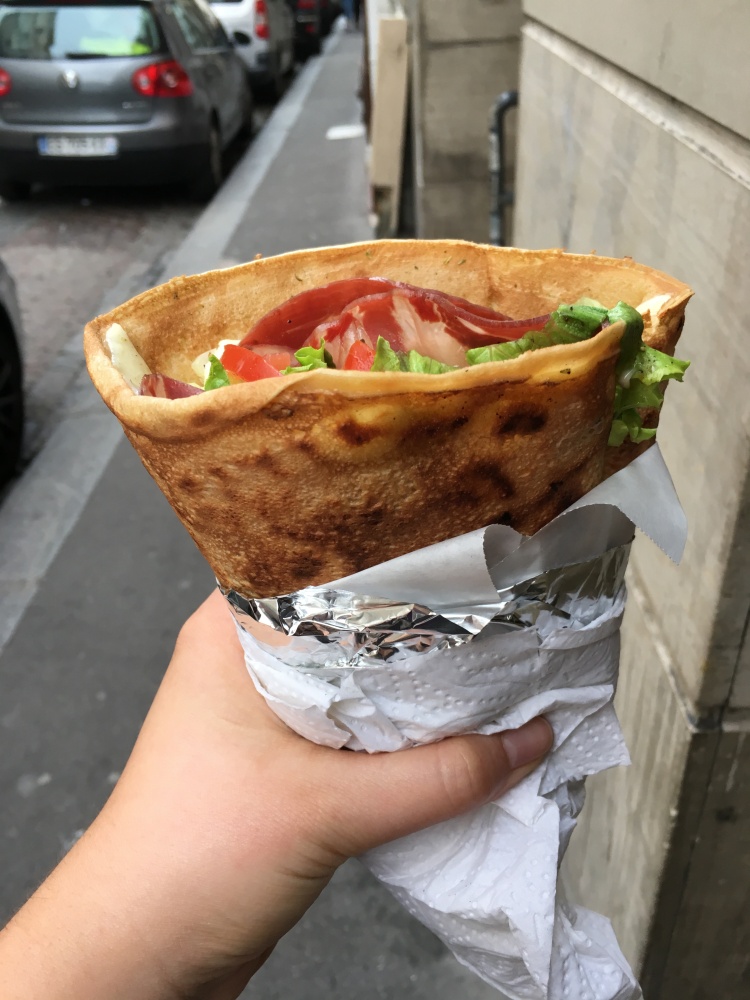 After dinner, I went up to my room to shower and relax. I promptly fell asleep just before 20h00.

After 12 hours of glorious sleep, I woke up on Tuesday feeling refreshed and ready to tackle the next two things on my to-do list: get a sim card for my phone and buy my carte jeune. However, things did not go exactly according to plan.

I had been informed that Orange was the best mobile plan to go with in Clamecy, so I headed off to the closest one to my hostel, which was about 1.4kms away. When I got there, I discovered that the store was no longer there. Thankfully, there were two other stores about one km away, so I walked up to its’ location. Sadly, I was informed I wouldn’t be able to get a sim card unless I had a bank account set up, so I walked away empty handed.

I then decided to try and get my carte jeune. I walked up to the Notre Dame, went down into the metro station, and promptly realized I wouldn’t be able to buy it until I got to the Gare de Bercy. Ultimately, I spent 2 hours wandering around and got very little accomplished (except for getting my exercise and seeing the Notre Dame). 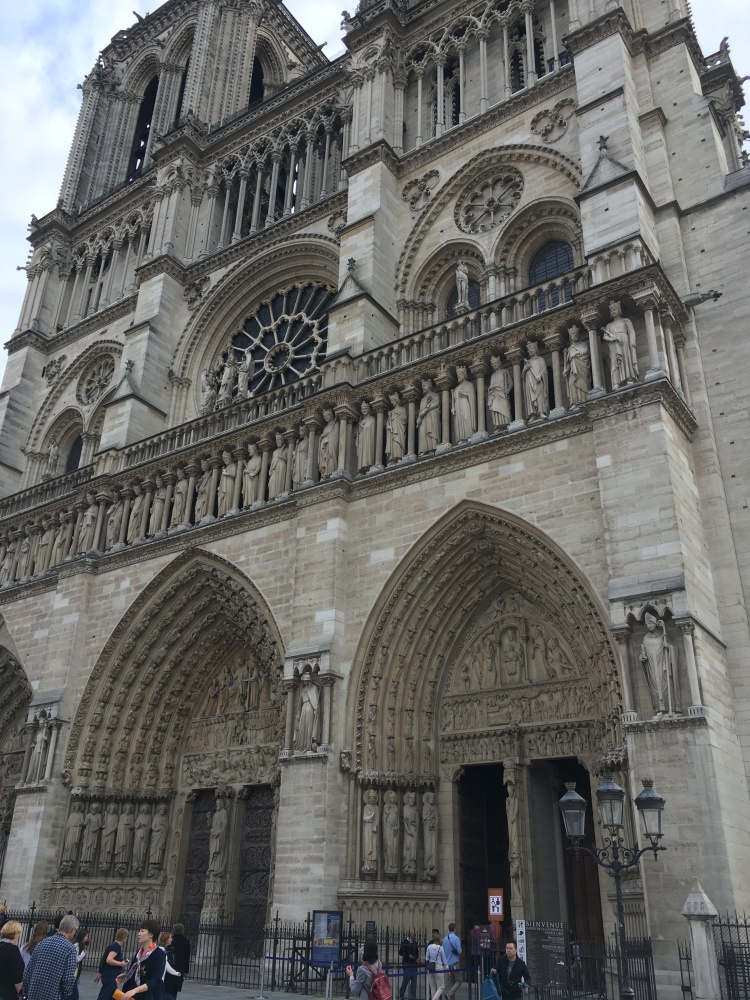 I quickly walked back to the hostel because I had a train to catch at 14h30 and it was already past 11h00.

When I got to my hostel, my ticket for Clamecy would not load on my voyages-sncf app and I did not have a printed copy of the ticket. Thankfully, I was able to send it to the woman working the front desk and she printed it for me.

I didn’t have too much time for lunch, so I stopped in the Franprix (supermarket) right next door to the hostel, and grabbed a quick lunch. It cost me less than 3 euros and it was pretty good too! 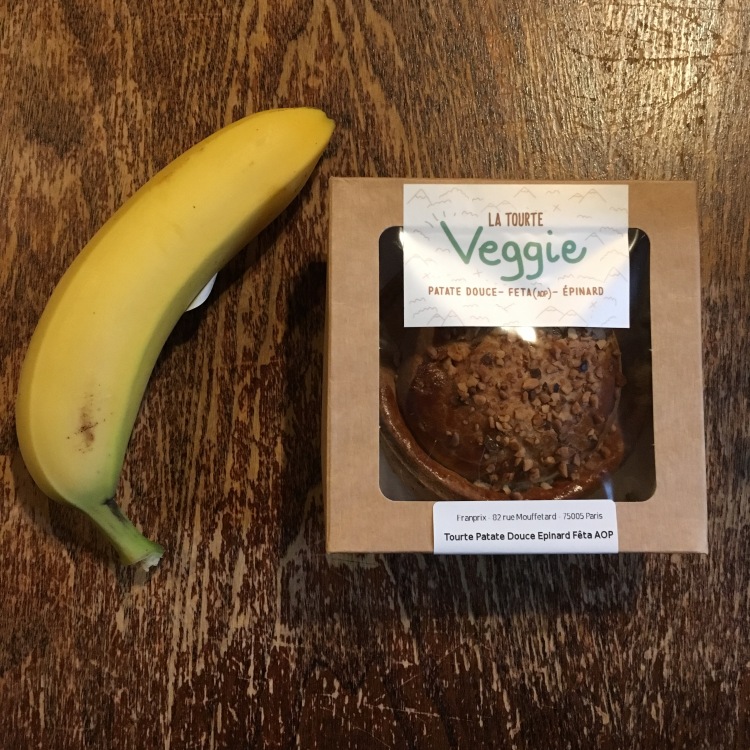 Then I grabbed my bags and headed to the Gare de Bercy! It was quite the trek (probably 2.8 km with 36kgs of luggage) and by the time I finally made it to the station, I was quite tired and sweaty. Here, I was finally able to buy my carte jeune and I hopped on my train.

Now I don’t know if this is normal, but nobody ever came around to check my ticket or my carte jeune. Theoretically, I could have gotten on this train for free and nobody would have known (except for my guilty conscious and everybody out there on the internet who is reading this blog). But alas, I paid for the ticket weeks ahead of time, so there is no reason to be upset about it. The ride was just over two hours, so I listened to a few podcasts and relaxed while taking in the view. 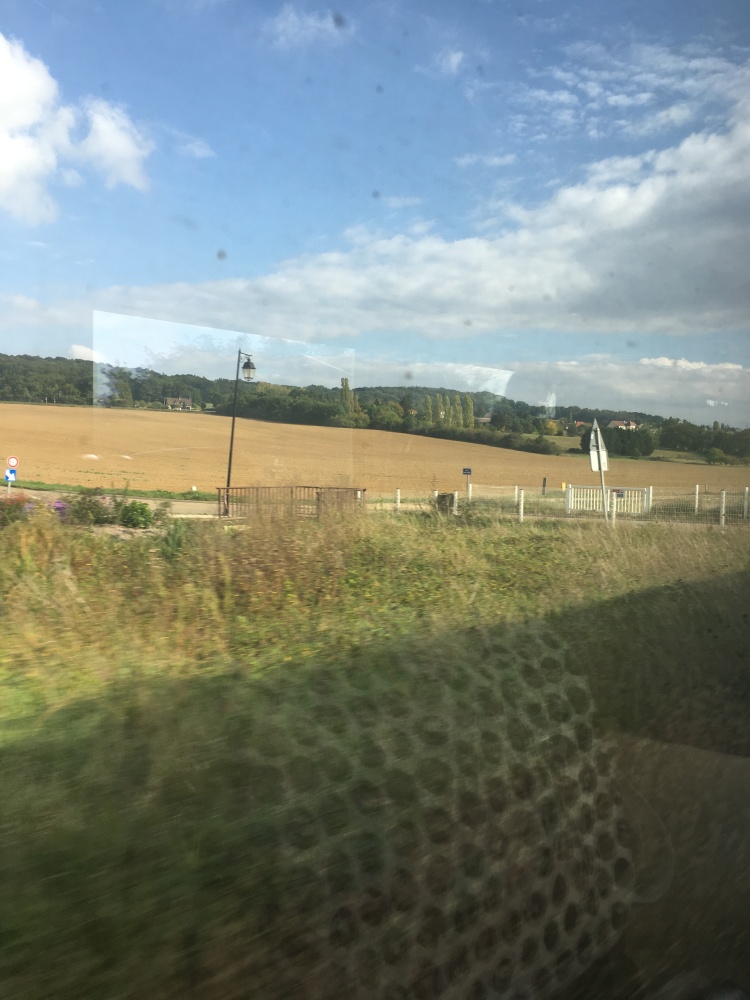 Finalement, je suis arrivée à Clamecy! One of the teachers (let’s call him “L”) picked me up from the train station and drove me to the lycée, where I met the Proviseur, some other teachers, and students, got a tour of the grounds, ate dinner at the cantine (très bien), and settled into my temporary living arrangement at the school. 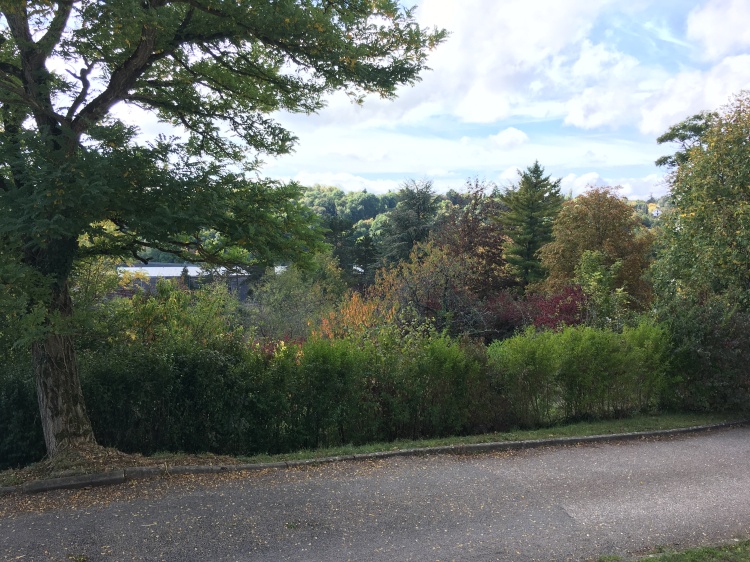 Mostly all communication has happened in English so far, as L is one of the English teachers, and I was pretty grateful for that. I love French and before arriving, I thought I had a decent grasp on it, but now that I am here, my brain and ears are overwhelmed. Maybe I got too accustomed to my French teacher’s slower, articulated, mid-western-accented French, but I feel like I only understand 30% of what is said to me. Everything is said so quickly that the speed, in combination with the accent, makes it hard for me to understand anything. If I am being honest, it is pretty discouraging. I know that I know the language, but I just can’t seem to keep up with listening or speaking. I am hoping that as time goes on, I’ll manage to adjust and learn to listen more effectively. It’s only day 2, so here is to a more successful day tomorrow in that regard.

Tomorrow, I am meeting EJ in the teacher’s lounge to get acquainted and meet some of the other teachers I did not meet today. Also on my to-do list is to open my bank account, get access to wireless, and figure out my sim card situation. Prayers and positive vibes would be greatly appreciated.