Holy cow, it’s already the end of March and I officially have just under a month left in France (excuse me while I go off into a corner and cry). On that note, we are coming to the end of my monthly TAPIF recaps, so please sit back and enjoy this March recap post!

In the Classroom
In EJ’s classes, I’ve been doing a whole melange of things: I’m still helping the one group of students with Etwinning (a class correspondence with the Czech Republic), worked with a few small groups on a modified version of my “Let’s Go on a Road Trip” presentation, and helping out with the whole class.

For L’s classes, I did the Lifeboat Activity with the whole class with mild success, and continued with my lesson experimentation – this time very much focused on games to get them talking and communicating in English. I’ve played Jeopardy, Question Bingo, Scattergories, “Circle Stories” and a modified version of Guess Who, and a PPT about American celebrities where they need to describe the physical characteristics of the celebrity (great for secondes!).

Finally, for DL’s classes, I’ve continued working with the terminales on prepping for the oral part of their BAC Exam, helped with full classes, and I have done a lesson about English “strange sounds” and onomatopoeias. I did a few small group lessons with some secondes where they had to give me a time, place, person, and verb and create sentences based off what they choose. I let them work in groups of two to choose their items and then create the sentence together. Most of the sentences were pretty tame, but I had two groups who were feeling sassy and wrote these gems for me: 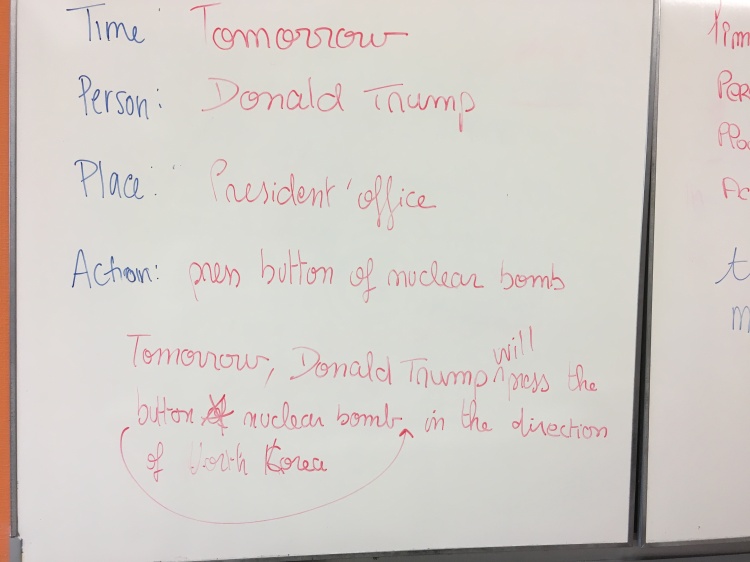 Destinations
This was another pretty good month of traveling for me! I went to Nevers with some students to see a performance of Edmond (it was pretty great!), spent another weekend in Beaune, visited a castle in St. Fargeau, and went to London on a vacances scolaires (with a pit stop in Calais on the way).

What I’m Reading
Do you remember how last month I didn’t manage to finish the fifth Harry Potter book? Well, I managed to make it through (finally!) but when I returned the book to the library, I discovered the sixth book was checked out with no date of potential return. Thankfully, I was able to find the ebook version through my library back home, which I was able to load onto my Kindle app, and downloaded the Audible app, which allowed me a free audiobook download. Long story short, I should have been doing this the whole time because I was able to finish the book in a week and a half and have started on the very last book (!!!). Folks, things are looking up for my reading goal and I think I’ll get there 🙂

What I’m Listening To
Given that I spent 24+ hours listening to Harry Potter et le Prince de sang-mélé in March, I don’t have a favorite podcast for this month. However, I do have a favorite song for this month. While it’s not a French song in its original form, I have been OBSESSED with the French version of Moana’s “Your Welcome” (in French, Vaiana’s “Pour les Hommes). I’m literally obsessed.

What I’m Watching
Instead of continuing to rewatch the same episodes of Big Bang Theory over and over again, I decided it would be better to start watching something new. On that note, I started watching Unbreakable Kimmy Schmidt and I am loving it! It is so wonderfully quirky. In addition, the second season of Jessica Jones came out of Netflix this month, so L and I have been watching that together as well.

Thanks for reading to the end and check back next week for more!